The ongoing spread of the new coronavirus has become one of the biggest threats to the global economy and financial markets.

The virus, first detected in the Chinese city of Wuhan last December, has infected more than 110,000 people in at least 110 countries and territories globally, according to the World Health Organization. Of those infected, more than 4,000 people have died, according to WHO data.

China is where majority of the confirmed cases are — more than 80,000 infections have been reported in the mainland so far. To contain the COVID-19 outbreak, Chinese authorities locked down cities, restricted movements of millions and suspended business operations — moves that will slow down the world’s second-largest economy and drag down the global economy along the way.

To make things worse, the disease is spreading rapidly around the world, with countries like Italy, Iran and South Korea reporting more than 7,000 cases each. Other European countries like France, Germany and Spain have also seen a recent spike beyond 1,000 cases.

“From an economic perspective, the key issue is not just the number of cases of COVID-19, but the level of disruption to economies from containment measures,” Ben May, head of global macro research at Oxford Economics, said in a report this week.

“Widespread lockdowns such as those imposed by China have been enacted in some virus hotspots,” he said, adding that such measures — if taken disproportionately — could induce panic and weaken the global economy even more.

Fears of the coronavirus impact on the global economy have rocked markets worldwide, plunging stock prices and bond yields.

Here are six charts that show the impact the outbreak has had on the global economy and markets so far.

The outbreak has led major institutions and banks to cut their forecasts for the global economy. One of the latest to do so is the Organisation for Economic Co-operation and Development.

In a March report, the OECD said it downgraded its 2020 growth forecasts for almost all economies.

China’s gross domestic product growth saw the largest downgrade in terms of magnitude, according to the report. The Asian economic giant is expected to grow by 4.9% this year, slower than the earlier forecast of 5.7%, said OECD.

The manufacturing sector in China has been hit hard by the virus outbreak.

The Caixin/Markit Manufacturing Purchasing Managers’ Index — a survey of private companies — showed that China’s factory activity contracted in February, coming in at a record-low reading of 40.3. A reading below 50 indicates contraction.

Such a slowdown in Chinese manufacturing has hurt countries with close economic links to China, many of which are Asia Pacific economies such as Vietnam, Singapore and South Korea.

Factories in China are taking longer than expected to resume operations, several analysts said. That, along with a rapid spread of COVID-19 outside China, means that global manufacturing activity could remain subdued for longer, economists said.

The virus outbreak in China has also hit the country’s services industry as reduced consumer spending hurt retail stores, restaurants and aviation among others.

The Caixin/Markit Services PMI for China came in at just 26.5 in February, the first drop below the 50-point level since the survey began almost 15 years ago.

China is not the only country where the services sector has weakened. The services sector in the U.S., the world’s largest consumer market, also contracted in February, according to IHS Markit, which compiles the monthly PMI data.

One reason behind the U.S. services contraction was a reduction in “new business from abroad as customers held back from placing orders amid global economic uncertainty and the coronavirus outbreak,” said IHS Markit.

A reduction in global economic activity has lowered the demand for oil, taking oil prices to multi-year lows. That happened even before a disagreement on production cuts between OPEC and its allies caused the latest plunge in oil prices.

Analysts from Singaporean bank DBS said reduced oil demand from the virus outbreak and an expected increase in supply are a “double whammy” for oil markets. 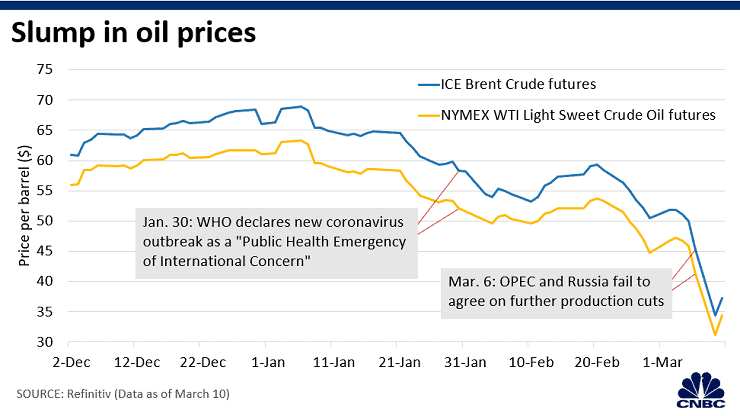 China, the epicenter of the coronavirus outbreak, is the world’s largest crude oil importer.

“The spread of the virus in Italy and other parts of Europe is particularly worrying and will likely dampen demand in OECD countries as well,” the DBS analysts wrote in a report.

Fear surrounding the impact of COVID-19 on the global economy has hurt investor sentiment and brought down stock prices in major markets.

Cedric Chehab, head of country risk and global strategy at Fitch Solutions, said there are three ways the coronavirus outbreak could work its way through sentiment in markets.

“We have identified three channels through which the COVID-19 outbreak was going to weigh on markets so that’s the slowdown in China, the slowdown from domestic outbreaks … and the third channel was financial markets stress,” he told CNBC’s “Street Signs Asia” this week.

Concerns over the global spread of the new coronavirus has also driven investors to bid up bond prices, resulting in yields in major economies to inch lower. U.S. Treasurys, which are backed by the American government, are considered safe haven assets that investors tend to flee to in times of market volatility and uncertainty.

Yields on all of the U.S. Treasury contracts fell below 1% in the past week — a development not seen before. The benchmark 10-year contract also touched its historic low of around 0.3%.

Such compression in U.S. Treasury yields could prompt the Federal Reserve to cut interest rates once again, several analysts said. The U.S. central bank made an emergency cut of 50 basis points last week, bringing its target funds rate to 1% to 1.25%.

“We believe that the Fed is cognizant that it has limited policy space for conventional cuts today versus past recessions, and will look to move more aggressively and ahead of market expectations to extract the maximum efficacy from its rate cuts,” strategists at Bank of Singapore wrote in a note.